(originally published in longer form on the NZ Noldor Blog)

I just came back from the first "official" Noldor event - an informal get-together of Hobbit fans, at local cafe Floriditas, where the slices of cake were even better than I remembered them, although they'd run out of chocolate cake by the time I got to them. I had to settle for the Apple Crumble, which was great as well.

There were twelve of us, and I reckon I may have to make this a semi-regular event. 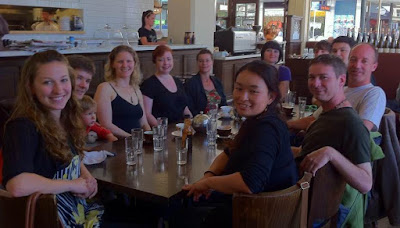 
Laura is a huge fan of LOTR who has come to Wellington to try and get some work on The Hobbit, and might just get the chance soon. Ryan is a scriptwriter who came with Jenifer on my tour some years ago, and have since moved from the USA to Wellington. Emily is a LOTR fan and a fan-fiction author who is quite an authority on all things Middle-earth, while Erica is famous for being a founding member of www.theonering.net. About a month ago, I met Annaëlle and Corrado wandering around Mount Victoria looking for LOTR scenes one day while I was touring with a group there - Annaëlle is Belgium while Corrado is from Italy, and they both came to NZ on a working holiday, and will be in Wellington for another month or so before they move on again, probably to the South Island for a bit. Brendan worked in the film industry in Australia and moved to New Zealand about a year ago, he's also hoping to get a Hobbit related job at some stage. I met Grant through this blog a few years ago - he's a big LOTR fan - but I hadn't met his partner Monica yet.


We talked about assorted Hobbit related subjects. Ryan and Jennifer mentioned they ran into John Howe on their way into the cafe today, so Mr Howe is back from his holiday, and apparently production is now in full swing at the studios. Obviously he couldn't divulge any details but by all accounts he and Alan Lee will be working in the South Island with the location scouts first of all, finding and designing new sets and locations for The Hobbit. Very exciting, but also totally vague - New Zealand's South Island is so big that it's generally referred to as The Mainland by its occupant!


Another interesting item though - apparently Martin Freeman (the new Bilbo) and Stephen Hunter (the dwarf Bombur) were spotted in Wellington on Friday night! No photos yet - if anyone spots them again, or any of the others, drop me a line!


On a final note - I mentioned that I have some Hobbiton photos that I might post. I've been persuaded not to post them by various people, for very good reasons, not the least being that if we see too much of Middle-earth before the movie begins, it will take some of the shine of the movie itself - something I certainly don't want to be a part of. However, I did want to post one photo taken at Hobbiton - I feel confident that it won't spoil the movie for anyone, and I don't think the lawyers will call me about it. So, here goes: 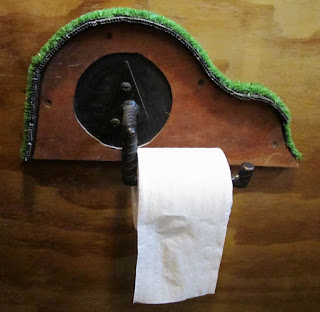 Yes, even the toilet roll holders are in the shape of Hobbit Holes. Awesome! :)