Royd Tolkien coming to Wellington, at the Roxy on April 12, charity event for MND association.

Technically, I understand that he's already here, but Royd Tolkien, the great grandson of our favourite author, actor, film producer, and brother of the late Mike Baker who died from Motor Neurone Disease (MND), has returned to New Zealand to "make a dick of himself" in honour of his late brother.

As you may know, Mike left Royd a bucketlist to finish on his behalf, and Royd is going out of his comfort zone to finish it, and to raise some funds for the MND association.

There's a good interview about it on the Wales Online website (it's a couple of years old but still good).

Royd is also filming his adventures, and this is being made into a documentary, There's A Hole In My Bucket.


MND New Zealand invites you to an evening with Royd Tolkien at the wonderful Roxy Cinema in Miramar, Wellington. Tickets can be purchased for $75 each.

Royd Tolkien and his brother, Mike, great-grandsons of J.R.R. Tolkien, were not just brothers, they were best friends. When Mike, the adrenalin junkie younger brother who loved excitement and adventure, realised his MND would never let him complete his bucket list on the other side of the world (New Zealand), he left it for Royd to complete. A challenge indeed given Royd says he hasn’t a “thrill-seeking bone in my body”.

There’s a Hole in my Bucket is a documentary starring Royd and is being filmed in New Zealand now. Royd says, “it is a journey of discovery and inspiration” intended “to remind people how precious and important life is and to make every second count.”

Join Royd at this event to hear about his experiences completing the 50 bucket list challenges his brother left him, most of which he will have completed by April 12th. There will also be some fantastic items and experiences up for auction, to be revealed in the coming weeks.

The Wellington event is hosted by the Roxy Cinema, on April 12th, and tickets are available for $75.

To find out more about the documentary, watch this YouTube clip (4 mins).

For tickets ($75) or sponsorship, please email Jodie at jodieattard@hotmail.com.


More news as it comes to hand!

Way back in December 2011, Welly-moot had a visit from Astrid from the Austrian Tirol Tolkien Smial (at Welly-moot #0.6). She's been back in New Zealand in 2015, and amongst other things,  visited Rivendell: 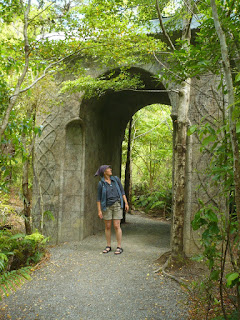 Unfortunately she wasn't here for our picnic last month, but she has set us a challenge for our next meeting. Astrid has started a little Tolkien project of her own. She is asking different groups some Tolkien themed questions, and is collecting answers, possibly to be published at a later stage.

As Tolkien seems to kind of forcefully "sneak back" into my life lately, I decided to start a little project. I raise a question, concerning things Tolkien that left me curious for some time, and collect answers and ideas...

Here is my challenge for WELLY-MOOT fellowship:

Reading LotR about Eowyn leaving for Minas Tirith among the riders, I was wondering about two unexplained facts:

First – beside any motive Tolkien had displayed for her action… there remains the fact that she ignored her responsibilities!
After all she had been second in line after her brother in royal hierarchy since her cousin had been slain on the battlefield. And Theoden King  had laid the faith of their people into her hands before when she had led them to Dunharrow (book version!). So in her decision to join the battle on Pelennor, just in case she would have died alongside her King and her brother – most likely outcome in opposite to the final story, she would have ripped her people of leadership entirely!
So I ask myself -  what is she now? A traitor, a  rogue, just a huge egoist, irresponsible…??? Or is she a great heroine of her time, after all?

Second – to WHOM did she pass on her responsibility for the Rohirrim? Especially as it had to be operated in secret? Any optional leader at hand was to join Theoden's army, after all.


So, there it is; a theme for our next meeting. We're going to need someone to take a few notes from our discussion, so we can send her our findings afterwards. In any case, it sounds like a great way to spend a Sunday afternoon, with lashings of coffee and scones. Come join us!


The meeting will be held, as usual, upstairs at the Embassy Cinema, starting at 2:00pm. All are welcome, including non-members. Bring money for coffee (but lifetime membership is free, as always).

While we're announcing international Tolkien events we're invited to, there's a cool few things on in Finland later this year as well. The New Zealand Tolkien has enjoyed a great friendship with the Finnish Kontu in the past, and we would very much like to continue that relationship!

I received a message from them a little while ago - check it out!

As you most likely know by now, the 75th Worldcon will be held in Helsinki, Finland from the 9th to the 13th of August. It is quite probable that many Tolkien enthusiasts from around the world are going to attend the con, so we thought that it could be fun to organize something for our international friends. The plan is to have a big picnic at Suomenlinna (http://www.suomenlinna.fi/en/) to which we'll invite every Tolkien fan that attends the con. It's a great and easy opportunity to meet Tolkien fans from all around the world, and we hope that you could inform your society's members about this.

The picnic will be held on Tuesday, the 8th of August. We chose the day before the con because people will be a bit too busy during the actual con to have time for an extra activity – and many people are arriving to Helsinki on the previous day anyway.

Suomenlinna is really easy to access from central Helsinki, and provided that the weather is good, it's a really nice place for hanging out with friends – in fact, our society goes there once every year with other speculative fiction groups! So while additional information will be given later (I'll create a Facebook event soon!) it'd be nice if your society could mention this to its members – we hope to see plenty of international Tolkien representation at the con!


So let me know (or email them directly!) if you have any interest in attending this event!