I've just heard a comment directly from Hermes himself (via his handler) about the details leaked of his Smauginess...


Hello!
can I please make a small correction to the above piece.
My handler said that del Toro had mentioned a description of Smaug once and it sounded similar to me, (but so do many dragons…) we know nothing more than the rest of the public do.
I’m simply a reference animal at digi, nothing more.
thanks for all the love and awesome pictures!


And here’s the link to the [del Toro] comment on GeekTyrant.com

Happy to come to the moot and meet though.


So what have we learned?

What does that all mean? Not all that much, I'm guessing.
Hermes, we'd love to host you. Please bring your handler, Shirley! By the time our next meeting rolls around on July the 14th, the new Hobbit trailer will have been released (the day after tomorrow, in fact), so perhaps we'll have seen a glimpse of Smaug by then. We'd love to have Smaug as the main discussion!

What else have we learnt? 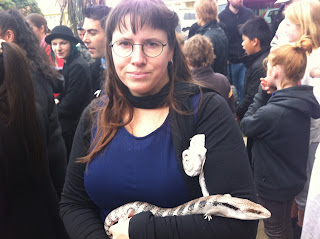 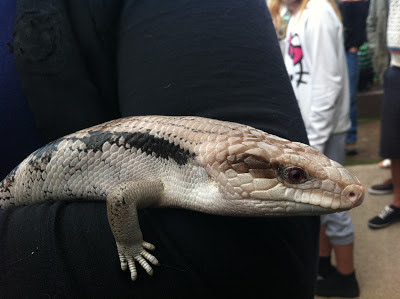 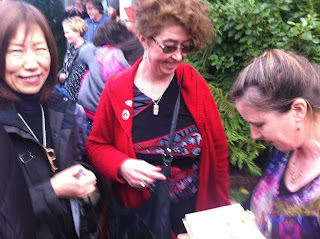 Armageddon is in full swing.

That sounded wrong. I don't mean the end of the world is nigh - Armageddon is Wellington's annual fantasy convention. This year, it was held at the Westpac Stadium (where some of the Lord Of The Rings' sound effects were recorded, back in 1999).

I'd spoken about the event to Annabel Graham, the jeweller who has created our gorgeous badges for us (see right-hand side-bar, here on our blog). Annabel had offered a bit of wall space from her Whovian Jewellery stand for our banner, and I had two days off between LOTR-touring to help her out a bit, so I decided to take her up on her offer.

The event started today (Saturday), so on Friday we came to set up the stand.

The Welly-moot banner was still on bamboo sticks from the last event, which I thought might help hold it up, but in the morning it had fallen over. Luckily I'd brought some tacks in with me, which solved the problem completely.

I didn't take photos of all the Doctor Who fans, but here's a few special visitors for the Welly-moot. Pay special attention to the last two photos! :)


All in all, a fun day, and we got to meet some awesome people. Apart from the obvious, we also ran into "our" Riventroll sculptor Kim Beaton who was doing live sculpting demonstrations with the newly named concrete "Pal Tiya", and Weta effects wizard Gino Acevedo. If you are in Wellington for the next two days, make your way to the Westpac Stadium - over the next few days there will be a lot more Hobbit actors around!