Wellington's official Tolkien lovers group met last week Sunday, and it was the day of the Middle-earth Quiz, something we've all been looking forward to!

Before we could begin, we had some business to discuss though.

First point of business was Kris' update on our involvement in the Hobbit Red Carpet Release day. Kris is working hard on getting us a grandstand on the Red Carpet route on November the 28th, and all is going well - we are currently awaiting news from the council about this. So the message is - if you want to have a pretty awesome view on the Grand Day, now is the time to join the Welly-moot!

On a related note, Welly-moot T-Shirts are coming, so watch this space. I'll be working on the final designs for them in the near future, and they'll be available online as soon as possible. The decision was made today that rather than making profit on the shirts, we would sell them at cost, so everybody will have a chance to get one as soon as possible, to wear on the big day. Even if the Grandstand doesn't come off (but it will!), we will still look like a "proper" group!

Kris is also making a big banner/placard to use on the day - the final look and exact wording is yet to be decided but it'll be sure to draw the attention of all the stars as they make their way into the first showing of the first Hobbit movie. :)


Earlier this week, I posted a Call for Volunteers for various Welly-moot projects. We've had a good response from it, and indeed one of the volunteers made it to today's moot, so that was great to see!

The first project - upgrading the "Hobbit Hideaway" paths on Mt Victoria, is well on track - it looks like permission has been given by the Wellington Council for us to volunteer our time, so now we have to decide the practicalities of it all. Welly-mooter Wayne has offered his help since he works as a landscape gardener (when he's not winning Tolkien quiz shows). So I'll be getting more details and we'll have more to report on by next meeting - perhaps even a finished result!

The second project - renaming a New Zealand feature to honour the memory of Professor Tolkien - was also in need of a Champion, or in this case a trio of Champions. Since Martyn has some experience in this (he was involved in the naming of the current Moa Point on Wellington's south coast), he has offered some of his time to look into the matter. I've handed over what I had at this stage, and I will put Martyn in contact with someone else keen on this, who started this whole process - my friend Aaron from Manapouri in the South Island. Aaron has recently renamed various features in the Kepler mountain range for some New Zealand astronomers, so together with Martyn, they should be the right people for this job.

The third project - the Rivendell upgrade - is going forward with great strides. The Greater Wellington Regional Council has been working very hard this week, and Rivendell in the Kaitoke Regional Park has a new path, which should hopefully keep everyone's shoes a bit dryer when it rains.

The Park Rangers have also improved the space around the "Legolas" tree, where Orlando Bloom had one of his most famous publicity photos taken. So many people had used the tree's roots to stand on for their own version of the photo, that the tree had started to signs of distress, and so, a few years ago, the rangers had built a small wooden platform to pose on. This platform however interfered with the "naturalness" of the photos. In the most recent upgrade, the platform has been removed, and a small path has been built to reach around to the same spot, without interfering with the tree's root system, and without being obvious in any photos. I'll post some photos and some examples as soon as I have them.

Also part of this project is a trio of beautiful hand carved wooden "Elvish" informational bollards to guide visitors through the ex-movie set. In the upcoming weeks I will endeavour to get full information and updates about this. Suffice to say that the bollards have already been carved, the locations are set, and we're currently working on the information - in English and Sindarin.

The most exciting project of all though, looks like it's starting to kick off properly as well. We're seriously working towards getting a sculpture in the Rivendell area. Or rather, just outside, to greet Rivendell visitors. More on that later... MUCH more! 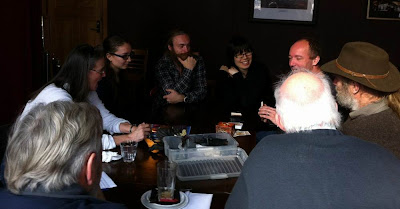 I had some 50-70 questions ready, but in the end we only had time for about 15-20 or so. Too much time was spent arguing over the finer details or suggesting preposterous answers instead - in other words, having a good time and enjoying ourselves!


The final results were large incoherent, although we agreed that Kris answered the most questions correctly, with Martyn in second, and Wayne in third place.


Everyone walked away with prizes though - Kris chose a complete set of five rare original Te Papa Museum collectible LOTR postcards, while Martyn both took home one of the gorgeous New Zealand/Middle-earth maps originally made for NZ Film. The maps were drawn by Daniel Reeve, who of course created pretty much EVERY map for Peter Jackson. Ever. The maps were donated by Wellington Rover Tours (so a big thank you to my boss Scott Courtney!)

We are looking forward to the next meeting, which may be sooner than you think - September 22nd is of course the birthday of Frodo and Bilbo Baggins, so we are working on organising a special party somewhere in the Outer Shire on the day (ie, Mount Victoria). Expect an announcement in the next few days!