Due to a very disappointing number of RSVP's from people planning to come to the end-of-year meeting/party on Dec 28 (ie, one person has responded), we've decided to cancel, or at least postpone the moot.

If you were thinking of attending on December 28th, please email me; I'll let you know alternative dates if we decide to have it later.

As an aside, the other icons there also allow you to follow the blog in easy ways - follow us on Facebook, Twitter, RSS-Feed, or on Google+ as well; whatever is easiest for you. They all work.


The mailing list is still in "test" phase, but it should work ok. I've had a report saying that on some computers the resulting emails take a little while to open but I haven't been able to duplicate that yet (so more testers would be appreciated!).

I promise not to send loads of spam your way, and at the bottom of every message there's instructions on how to Unsubscribe again as well. Keep in mind it's all a manual system so I'll be adding and removing the entries myself, when I have time to do it (so please be patient with me!).

So, hit that magic envelope button! We have operators standing by!

The last Welly-moot of 2014 will be held on the last Sunday of 2013, December the 28th. It's fast becoming a tradition, but Alex & I (Jack) will once again be hosting the final moot of the year at our house. Since this is our private home, we will not be taking on new members for this meeting.

Just like the last few years, this will be a shared lunch, so please bring a plate (full of food, obviously). :)


So, if you're currently a member of Welly-moot, and want to come and join us for a friendly get-together, send me an email and I'll reply with the address. If you're not sure if you're a member, email me anyway. :)

My email address is "jack@welly-moot.com".

We're aiming for a "bring a plate" lunch, so please bring something yummy to share. Home-cooked will receive the best compliments (hint!)...


Details of the lunch:


As for a theme - we're hoping that everyone has had a chance to see the last Hobbit movie, so that will be the topic of the day.

So be warned, there will be spoilers!


Please email me with your intentions!

The Welly-moot was present at the Hobbit 3 Premiere event at The Roxy last week, and Dianne sent me a copy of a great group shot. Thought I'd share it here for the group! 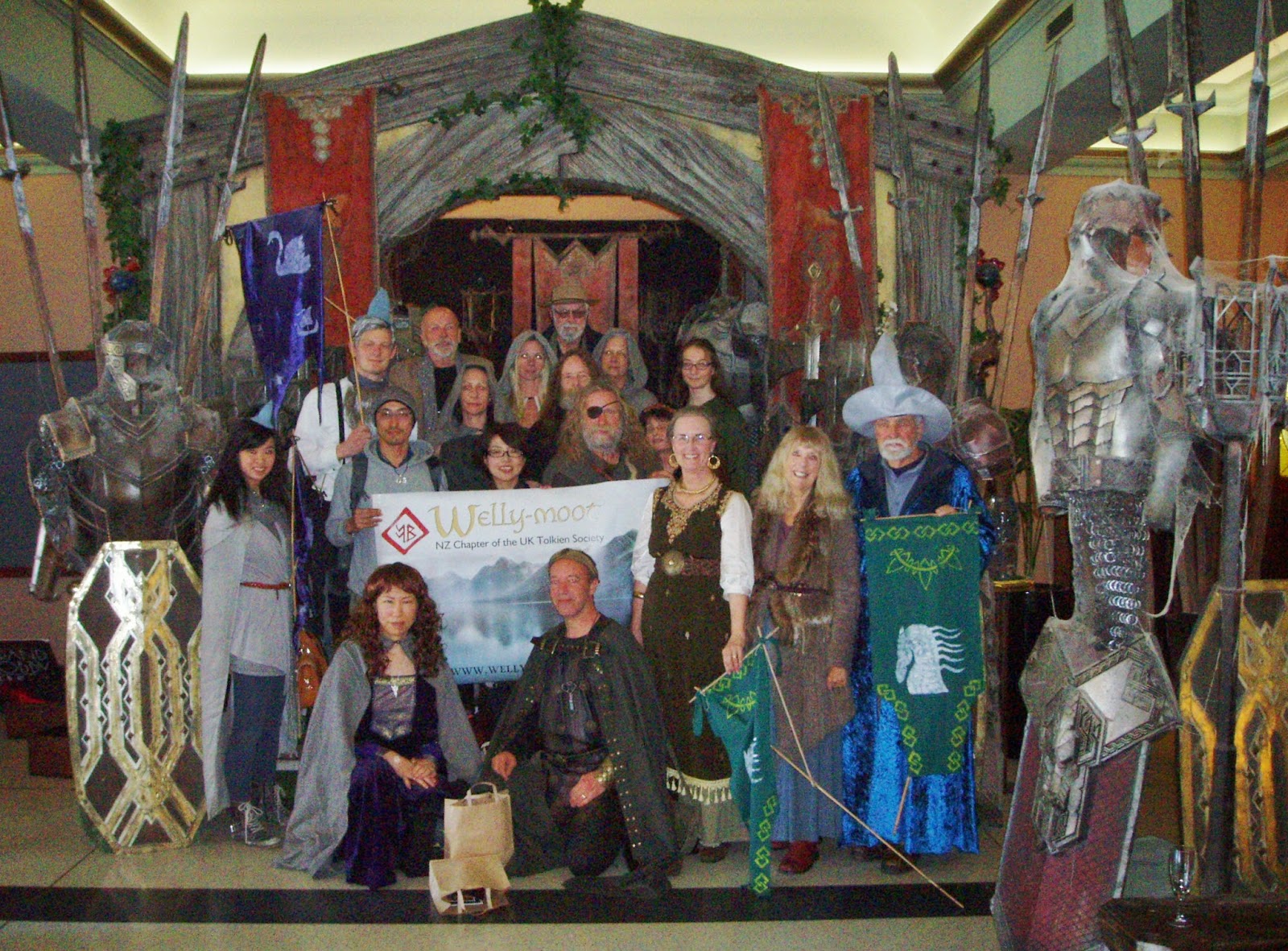 (If you can't see the picture, click on the link to get out of facebook - the blog has the pics)

Talk: "Tolkien & The Spirituality Of The Hobbit"

Through our contacts at the Roxy Cinema, I've been alerting to a Tolkien event happening next week.

On December 18 at 7:30pm, local vicar Dr Tim McKenzie will be delivering a talk on "Tolkien & The Spirituality Of The Hobbit" at the clubhouse of the Seatoun Bowling Club (16 Dundas Street, Seatoun). 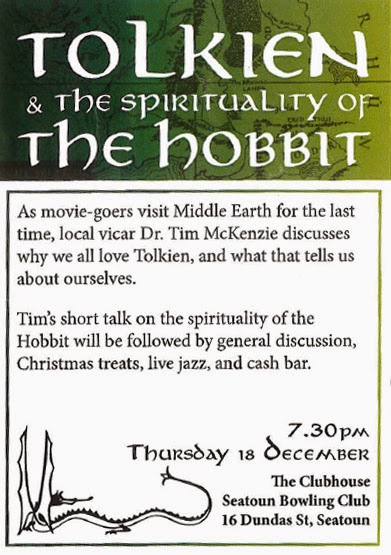 All are welcome - and the talk itself is free. The bar will be open for refreshments.

I plan to attend, and will be driving through town to get there - let me know if anyone needs a lift.

On December the 2nd, early in the morning, the Roxy will be hosting a special event and advanced screening of Hobbit 3 BOTFA for a select audience. The exclusive event, is Invitation Only, and the Welly-moot has been given a number of invitations to distribute amongst its members.

Those regular attendees of our meetings who were able to attend the event, as well as a number of other deserving Tolkien fans, have now been contacted, and your tickets should now be making their way to your door. If you haven't heard anything from the movie's distributors (Roadshow Ltd) by now, please get in touch with me as soon as possible!

I've been sent a press-release from the good folks at Roadshow Ltd, so rather than me retyping their event, here's the complete text from their memo.

MIRAMAR CELEBRATES THE FINAL FILM IN THE HOBBIT TRILOGY

Gearing up for the release of The Hobbit: The Battle of the Five Armies, The Roxy Cinema in Miramar, Wellington will play host to a special celebration on December 2 (NZT), with an advanced screening of the film to an audience of fans, local cast and crew from film production with Sir Richard Taylor in attendance.

The Miramar event is part of a global celebration of the final journey to Middle-earth and will be linked via interactive satellite with the film’s London World Premiere, which will stream live before guests and VIPs prior to watching the highly anticipated finale of The Hobbit Trilogy.

Marking the end of an era, this special premiere event brings together the Wellington film community to celebrate all the hard work and inspiration that has gone into bringing the world of Middle-earth to life for The Hobbit Trilogy and The Lord of the Rings Trilogy more than a decade ago.

“It’s truly fitting that the Wellington celebrations for the film will be held here in Miramar where it all began; as a phenomenal journey and era comes to an end,” said co-founder and co-director of WETA Workshop Sir Richard Taylor.   “The day marks a significant milestone in our career, and I am both excited and eager for what is next to come.”

Counting down to the New Zealand release of the film, New Zealanders can also enjoy a special 10-day projection presentation at The Roxy starting December 1.

The Hobbit Trilogy will be brought to life on the front of The Roxy building where a state-of-the art 10-15 minute projection show will play multiple times each night just after sunset.

“Ann and I are thrilled that our iconic, award winning cinema is playing host to such a significant and world-class event,” said Roxy co-owner Jamie Selkirk.

Showcasing the breathtaking special effects created by WETA Workshop and WETA Digital using sound and projection, the presentation follows the film’s characters and creatures on their adventures through the first two films leading up to the release of The Hobbit: The Battle of the Five Armies.

Sir Richard Taylor also endorsed the projections. “I hope visitors to The Roxy are inspired, and enjoy their time in the heart of the film making capital, Wellington,” he added.

The film, a production of New Line Cinema and Metro Goldwyn-Meyer Pictures (MGM), is the third and final film in Peter Jackson’s The Hobbit Trilogy and releases across New Zealand cinemas on December 11.

New Line Cinema and Metro-Goldwyn-Mayer Pictures Present a Wingnut Films Production, “The Hobbit: The Battle of the Five Armies.”  As with the first two films in the Trilogy, “The Hobbit: An Unexpected Journey” and “The Hobbit: The Desolation of Smaug,” the final film is a production of New Line Cinema and Metro-Goldwyn-Mayer Pictures (MGM), with New Line managing production.   Warner Bros. Pictures is handling worldwide theatrical distribution, with select international territories as well as all international television distribution being handled by MGM.

NB: This page will no longer be updated - check our new Calendar page instead.

Like last year, I've been collecting details about events planned around the opening of the final installment of The Hobbit movies.

Also: if you HAVE extra information on these, or other events, please let me know!